The Story of Grace

Grace came to us in a fairly unusual fashion. It was kind of a bootleg adoption.

Not long after we moved into the house, GPA-Wisconsin was looking for a foster home for a dog waiting for adoption. Austin was a cutie and full of energy. We enjoyed her company for less than a week before adoption took place. It was hard to let her go, harder still when we learned the new home had been foolish enough to walk her off-lead and she was killed by a car.

When GPA-Wisconsin called regarding Grace, they were very forthright. Grace was a problem child, had failed a private adoption and placing her might be difficult given her history. Her prior owner had purchased Grace directly from the racer/breeder without any vetting of either dog or prospective owner by GPA. Early in the adoption the owner had startled Grace by trying to snuggle her as she slept. She snapped at him and opened a pretty bad gash in his cheek. When he dropped her (and favorite toys) at our home, we could see the scar it left behind despite a full beard. His fiancé’ had insisted Grace must go. She wanted children and a ‘vicious’ dog did not fit that equation. 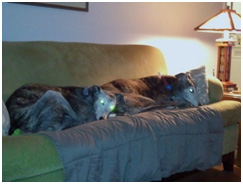 Grace adapted quickly to her new home and seemed to enjoy Sunny’s company. (Once the paperwork caught up, we discovered they were half sisters both having been sired by Wigwam Hoss.) Sunny did not share that sentiment, and clearly resented the intrusion. She attacked Grace in the back yard, opening a gash in her side. That was quickly punished and it never happened again, but Grace remained terrified of Sunny and stayed out of her way most of the time. This is not to say they did not cohabit well, but Grace was guarded.

Grace was so very much Sunny’s opposite: cheerful, playful and eager to please. Sunny tended to be laconic, disinterested and only heard you when she wanted to. Grace would gladly chase a ball or Frisbee for quite a while. Each time she caught it, a victory lap would result and turf would fly up behind her like a rooster-tail behind a fast boat. 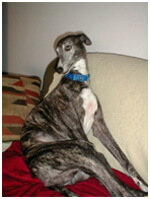 She was the first to be ready for a walk, to respond to a call and the first to want to snuggle up next to you on the sofa. She sat like a human, butt against the back of the sofa, legs splayed in front of her and forelegs and head held high. Well, until she melted into your lap or the corner to curl up.

Kay taught her to shake hands sitting next to her. In a few days, she only needed to see a hand in front of her to plunk that big paw in your own. She was smart, charming and quickly made sport of my initial insistence that dogs did not belong on furniture. Fortunately greyhounds do not shed very much. She had the warmest personality of any dog I ever owned. She was playful and demonstrative. You knew when she was especially happy as she had this delightful grin. It took a while to not be put off by it. 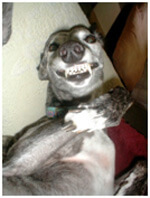 As Grace aged some of this youthful enthusiasm gave way to milder ways and days. What she lacked in vigor was offset by increasing affection. She was always the first to great you when you came home, first in queue for daily walks and the first to snuggle up with you on the sofa. Our guest bedroom became Grace’s bed until she could no longer make the jump up there. She had to settle for one of the five dog beds scattered about the house.

Both dogs began losing enthusiasm and their hindquarters grew weak. Gone were the days of hoping up on a bed or sofa. Walks became slower and shorter. After lots of veterinary expense and advice, Kay turned to Jody Bearman, DVM (anshenvet.com) for acupuncture and dietary assistance. Sunny embraced acupuncture instantly. She quickly fell in love with Dr. Jody who remains her favorite periodic visitor. She would doze through those needles as long a Jody cooed in her ear. Each of them thrived on the natural diet (supplemented with dry dog food). Each week I would braise: grass-fed ground beef and liver, sweet potatoes, tripe, brown rice and chard. Once softened, the stick blender turned it into a course paste. Some days, they ate better than we did.

Grace wanted nothing to do with any vet, especially Dr. Jody. She suffered through visits to the regular vet and we discovered she was beginning kidney failure in addition to the weak hind quarters. Her days were clearly numbered. We had expected Sunny to go first given the difference in attitudes and energy. We were wrong. 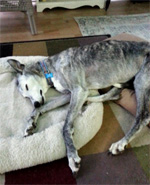 At 1 AM September 11, 2013, Grace fell trying to get up to go out. She managed to go outside and barely made it back into the house before her hind legs collapsed. She kept struggling to stand, but could not do it. At one point over the next several hours we rigged a towel under her belly and took her out again. She refused to settle down, so we took turns lying on the floor with her until the vet’s office opened. At one point, I simply restrained her as she tried to rise, knowing that each failed effort took more out of her. She seemed to rest. It was a long time until 8 AM.

The vet was unable to help us unless we brought her in. We wanted home euthanasia since she hated going to the vet and she was too distraught already. They referred us to Katie Hilst, DVM from Hilst Housecall Veterinary Service who was at our door just 30 minutes later.

She took a brief medical history of Grace, inquired about which drugs she was on, and listened to our story of the night before. She asked, “Is it time?” We assured her it was, knowing Grace was so uncomfortable. All the while, this lovely dog who hated vets kept looking up at this stranger as though to say, “Can you help me?”

Dr. Katie gently swabbed the injection site, which I found odd. Infection hardly seemed an issue. First she administered a tranquilizer to let Grace rest. The change was quite quick; she seemed to relax completely but her eyes remained open. Dr. Katie again asked, “Are you sure?” We nodded yes in a tearful unison. She gave her two more injections. We stroked and comforted and cried upon Grace as she passed. “She’s gone.” From Dr. Katie was both blessing and heartbreaking.

Before gathering Grace up, she made a clay impression of Grace’s right front paw as a keepsake for us. She also made sure Sunny came out to say goodbye – she had been ignoring everything going on. We gathered what used to be Grace onto a gurney and carried her to Dr. Katie’s car. She arranged cremation and her ashes are with us now.

Since Grace passed we have noticed Sunny is more energetic and even more social, but her appetite seems off, less voracious than usual. The two vets assure us that Sunny knew Grace was not well, thus she was more subdued. Additionally, without another dog potentially competing for her food, she could be more relaxed about consuming it. Knowing Sunny, these seem reasonable. She is also suffering through having to accept all the love two dogs should have been getting reasonably well. In that Sunny is only six months younger than Grace, her time will come soon no doubt, and she will be well treated.

We have begun discussions on what dog comes next. Once Sunny is no longer with us, this house will need at least one dog, if not two. What breed? Greyhounds are lovely and loving creatures, well worth rescuing; but as they age, care becomes quite expensive. I lean towards rescuing and Doberman or even a pit bull. Kay would like a small terrier, but I think I can hold the line on that. What is likely to happen is we’ll just visit the Humane Society and let some lucky dog make us want to love them.

A home without a dog is just a house.

In-home euthanasia service within our service area around Madison, WI and surrounding areas.

Read Tributes to our…