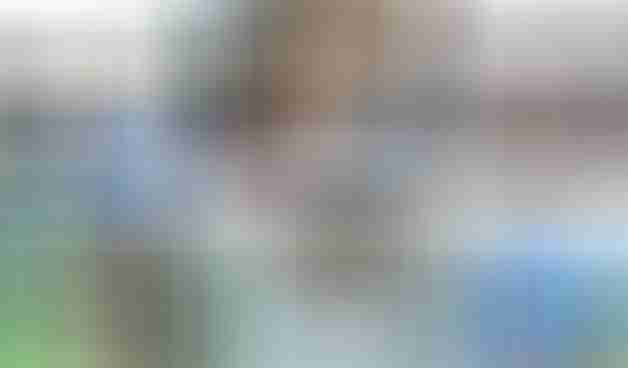 I had lost a dog named Cassie to old age and health related issues and was looking for a replacement. I saw nothing in the paper but I did visit a local Airedale breeder and looked at her dogs. They were not what I was looking for as I thought they were “All hat and no cowboy.” I didn’t want a city show dog. I Googled Airedales and found the Airedale Terrier Rescue & Adoption (ATRA) website. Looked interesting so I filled out an online application hit the button and away it went. About two weeks later I was getting calls on my phone from a Sun Prairie number. I finally was home to answer it and found myself talking to Kathy Williamson, a local Airedale owner and breeder. She was calling as a volunteer on behalf of ATRA and wanted to do a home visit. Kathy and Carl stopped out, checked the place out and Kathy said “We have to get you a dog.” The ATRA website was only showing maybe 3 or 4 dogs at the time and I saw a dog listed by the name of Rose located in Arkansas. Nice looking dog but when I said I would take her I was told a local home wanted her and seeing it was local, they had first dibs. But they said they had another dog in Arkansas that was unlisted. I thought the old bait and switch game. I remember saying I can’t take a dog without seeing a picture so they sent one. I had dial up internet at the time and the picture wasn’t half on the screen and I said I’ll take her. I talked to Wendy Pauquette, local ATRA rep in Little Rock, AR at the time, about this dog named Aspen and she told me she is the “sweetest of the sweet.” How true that was. I made out like a bandit. Aspen was transported to Cedar Rapids, IA by Coleen Rapier. I drove to Cedar Rapids on June 19th ,2003 and picked Aspen Maggie up and brought her home. I found out from Wendy that Aspen Maggie had been in 2 homes already. When I picked her up in Cedar Rapids, she wouldn’t stay in the front seat but went in the back and stayed right behind me so I couldn’t reach back and pet her. We got home, she did a yard tour, house tour, yard tour and back in the house. She was home.

In March of 2004, I took Maggie to the Badger Kennel Club Canine Good Citizen class in Madison. I don’t remember but I think the weekly classes were about 1-1/2 to 2 hours long and lasted maybe 6 weeks. Good program for Maggie and me and the classes required practice practice practice. The dogs had to take a test the last day to get a certificate. Maggie did practice practice practice and on about the 4th drill we went thru at home on test day, she sat down, looked at me and her eyes said, “don’t worry, we’ll pass.” We went to class and she did and got her certificate and she remembered everything.

I attended an ATRA fund raiser in Sun Prairie after I got Maggie and met some of the volunteers with ATRA. I offered my services and after maybe 4 months, I was asked to help in the transport of a dog named Elizabeth. I agreed to help and found out it was easy and volunteered to do more if needed. I answered a request to help the transportation coordinator and ended up with the job. Over the course of several years, I set up close to 280 transports of Airedales. I later started driving for other rescue groups and transported 265 dogs. I never would have done this if I hadn’t got Maggie through Airedale Rescue which introduced me to dog rescue. Maggie got to go along on a couple runs but was content to stay home most of the time. Maggie was responsible for me helping many other dogs.

Maggie was a good house dog and not real destructive. She did destroy a small Teddy bear and a book but that was it.

She was very well house trained and had no accidents. She had her own dog dish and water bowl and left Teddy’s stuff alone. She would go everywhere with me she could and had the whole back seat to herself. When she got older, I made her and Teddy a step to help them get in the backseat. Sometime early on Maggie started sleeping on the bed and this continued up to about a year and a half ago. She then started sleeping in the basement on mats down there. She started having trouble doing the steps so I installed knobby surface stair treads so she had better traction and this increased her ability to do the stairs. She always had something to say to Tucker, the neighbors Border Collie. Lots of trash talk by the gate or along the fence. In her younger years, she would bark at people going up or down the road but not so much later on. It was in August of this year I noticed her hearing was very poor and probably didn’t hear much of what I said. Her hips were failing and the pain she was having was obvious. I feel Teddy kept her going and she kept Teddy going.

Maggie was with me 24/7/52/13+, inside outside most kinds of weather. She was always present when I was mowing the yard and would walk ahead of the mower on just about every pass I made when mowing. She might catch a mouse or two but most of them got away. When she figured out I would go to one end of the field and come back again she would sit at a vantage point and watch. If she was outside and I was inside, she would position herself to be able to see the entire front of the house to catch me coming out. She always was somewhere she could see me. She was my guardian angel I guess. This past year she and Teddy would be with me when I started mowing the yard but they tired rapidly and were happy to go in the house. When I went back out and started the mower, they would bark at the window but then go lay down somewhere.

Maggie was a pretty healthy girl. She broke a nail a couple of times, had a couple teeth pulled, had some bugs in her digestion system as I recall and did have a bout with cerebellar disease once but it never came back. No major surgery like Teddy. She was easy to take to the vet and yes, I do remember hearing a vet tech say “you brought the nice one in today.” She was the complete opposite of Teddy at the vet office. I loved the comparison. She had a very black saddle and good Airedale colors. She wasn’t fond of grooming but Tiffany, her groomer took good care of her. I liked the dogs with a short cut, made it easier to get the burrs off. She was smaller than my previous Airedales and I called her my “Little Girl.” Maybe not the perfect Airedale but she was the perfect dog.

Wendy had said Maggie had been in 2 homes already when I got her and her third home, mine, was the charm. She was a super dog and a great companion. I gave her a good safe home, she had a great life and she gave me many memories that I will have forever.

Thanks Maggie, I miss you and take care of Teddy, he will protect you.